One of the best ways to see any new city or country is to dive, mouth first, into their local cuisine. Taking a food tour exploring the backstreet and local eateries is one the most authentic ways to enjoy any new location. Thailand’s cuisine offers a heady mix of sweet, spicy and salty tastes to compliment most foodie cravings. Coupled with the energetic chaos of the street food vendors lighting their woks and whipping ingredients in a quick frenzy to produce mouth-watering plates of food for a fraction of restaurant prices, makes for a memorable meal. 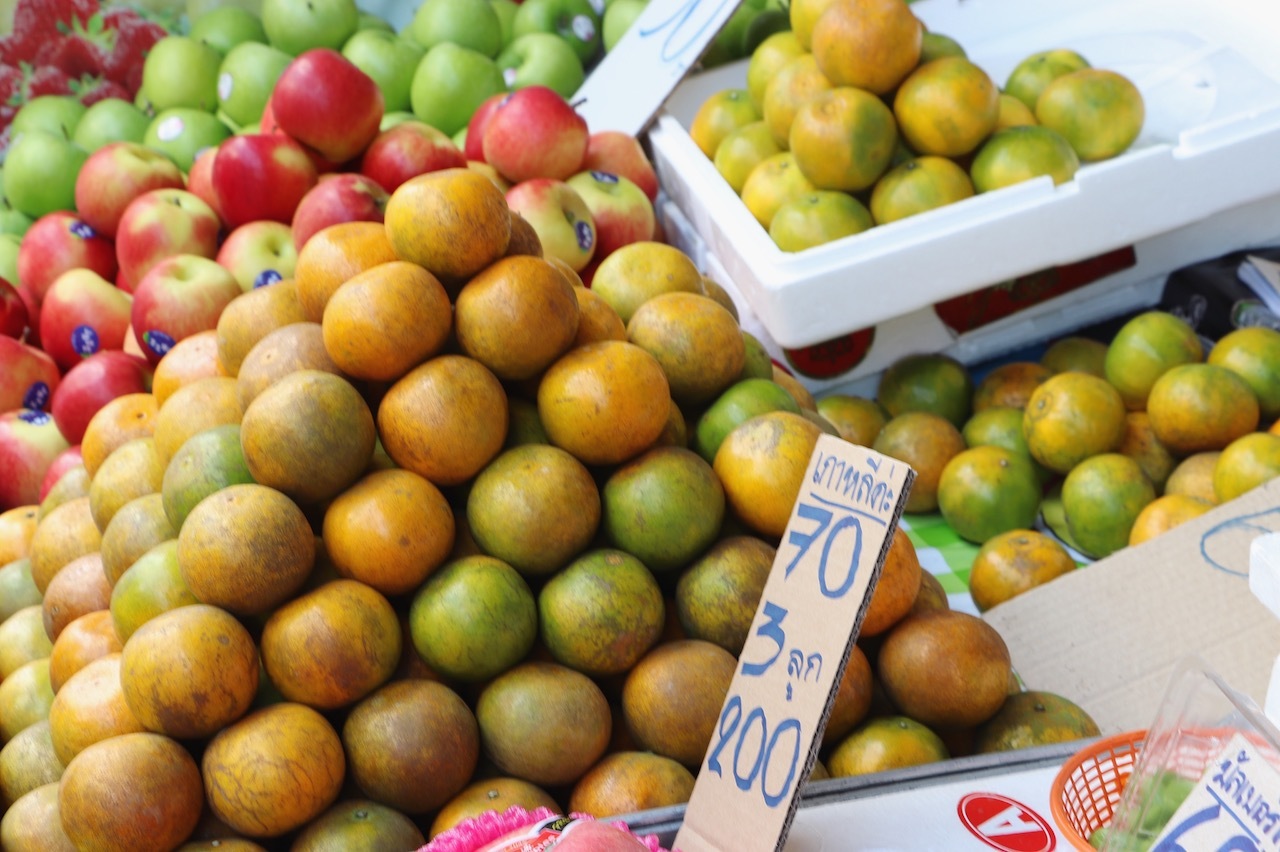 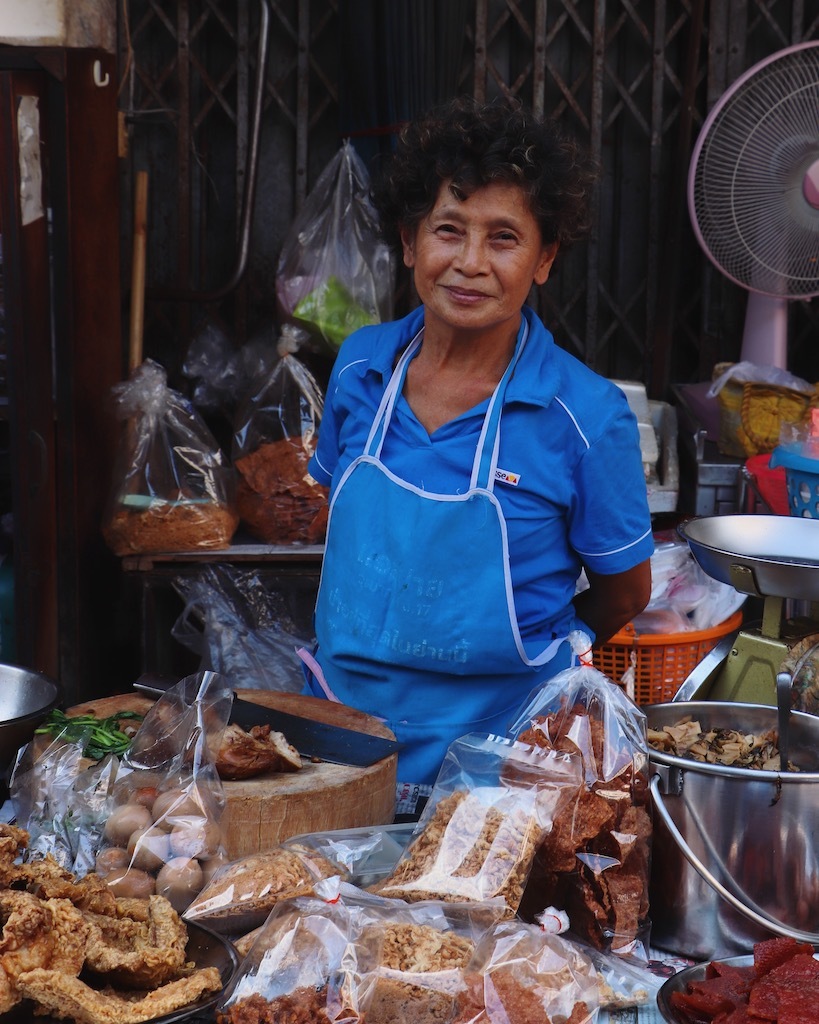 Bangkok Food Tours host a number of opportunities to delve into the ‘real’ Bangkok with daytime tours, night markets and even an exotic bar crawl for those keen to see the night-lights, and life, of the City of Angels. For those wishing to explore a Bangkok undeterred by the current wave of city development, Thonburi Food and Canal tour takes in the ‘other side’ of city exploring local neighbourhoods set within this 8-million people strong metropolis. Thonburi was once an old capital of Thailand on the west side of Chao Praya river, Bangkok’s main water artery. In a city that has rapidly expanded in the past few decades, this neighbourhood today preserves a charm and many of the traditions of the past, surrounded by canals and agriculture land.

Meeting at the BTS Sky Train station, our small group of three plus guide head to the local fresh produce market in Talat Phlu in the back on a songthaew, a red open ended pickup truck that acts as a shared taxi popular in these parts of S.E. Asia. But first stop, a street vendor selling savoury steamed dumplings filled with spinach-like greens laced in soya sauce. We sample standing street side the sweet/salty flavours a good start to what will be a belly filling morning. Next, on to a mamma and pappa style soup eatery serving Tom Leod Moo, a simple bowl of meat broth layered with offal – heart, liver, kidney and pigskin - the cheap cuts of the animal most people could afford in the past and a dish that continues to prove a popular breakfast staple for many of the neighbourhoods residents. 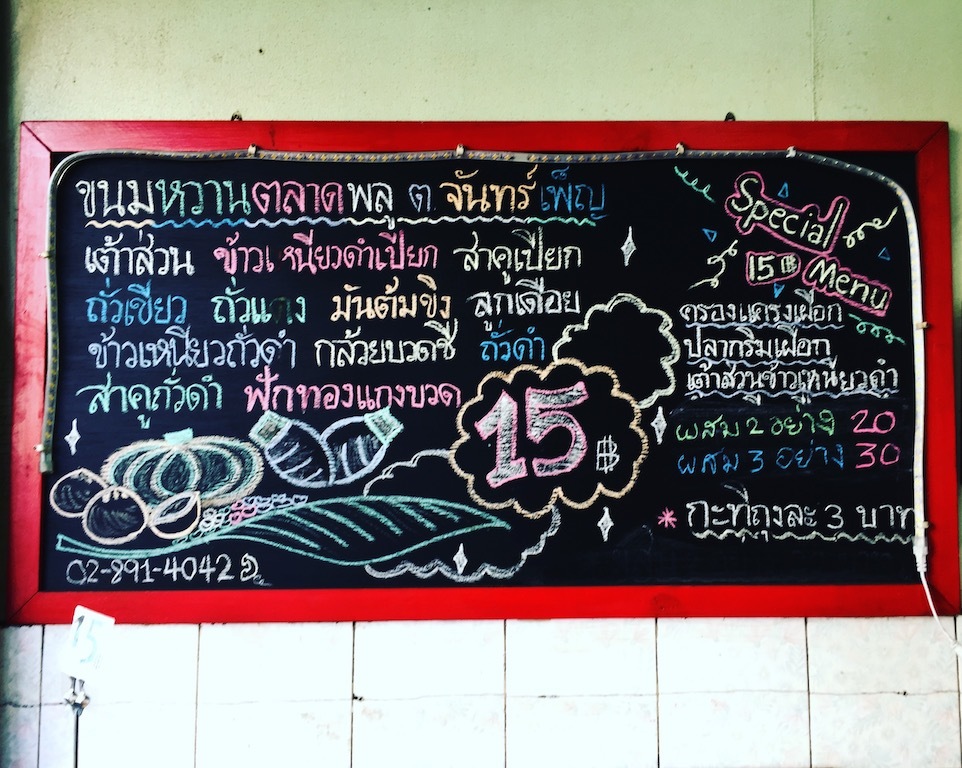 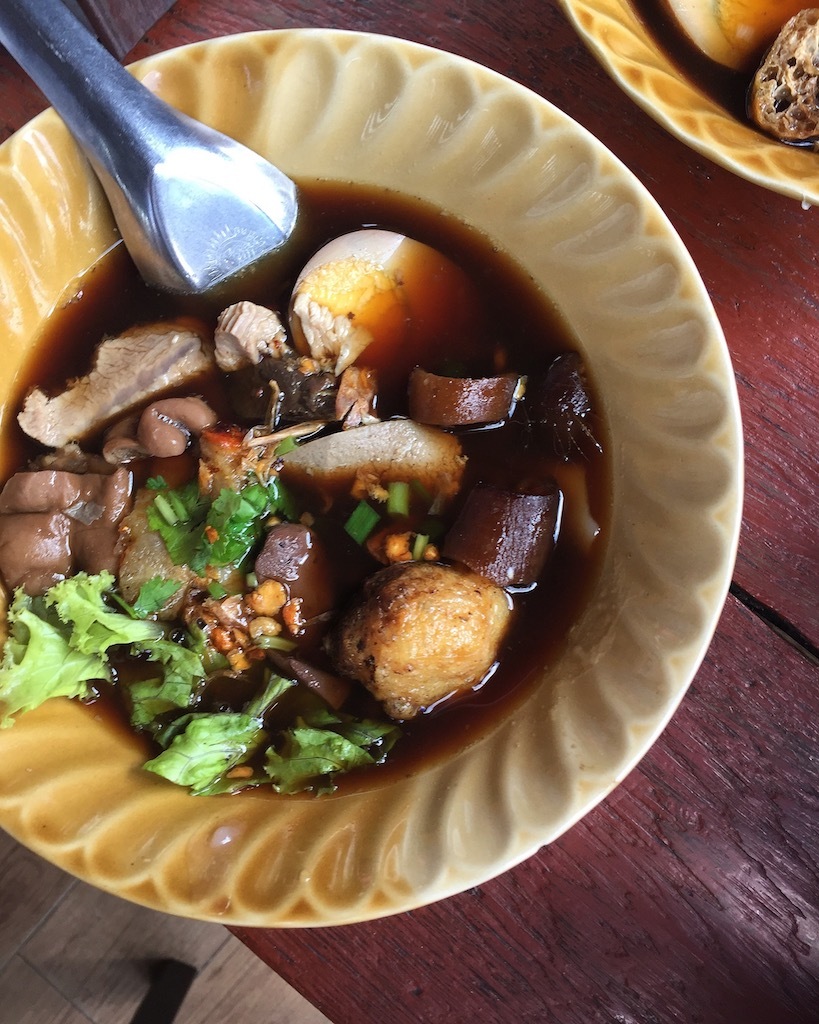 Entering the fresh food market, the smells of fresh herbs scent the air cut with the thump of butcher’s knives as they slice the morning’s meat offerings. We wander through the bustling scene taking in the local produce to a third generation Thai coffee house by the canal edge. It feels like entering a film set in late 19th century Bangkok before modern day construction changed the shape of the city. A group of elderly men play cards and sip sugary tea at a nearby table; we dive into freshly made doughnuts perfect for dunking in the thick coffee which has been strained and contains enough caffeine to keep the most budding coffee connoisseur awake for the next 48 hours. 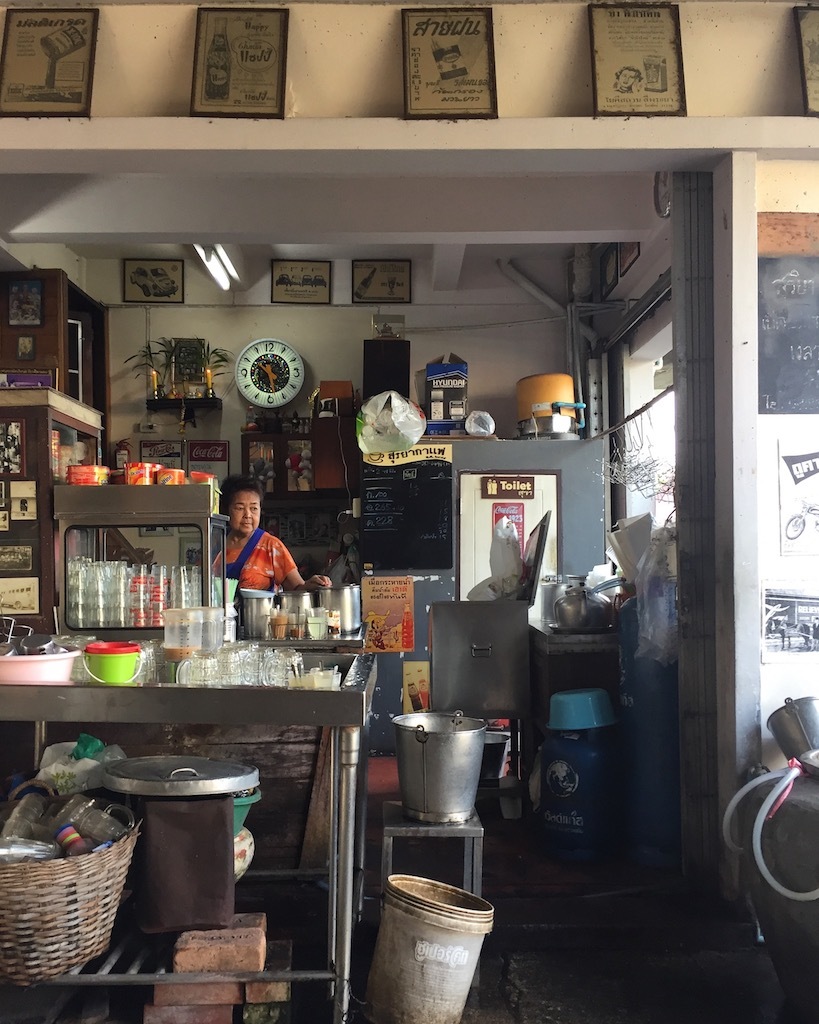 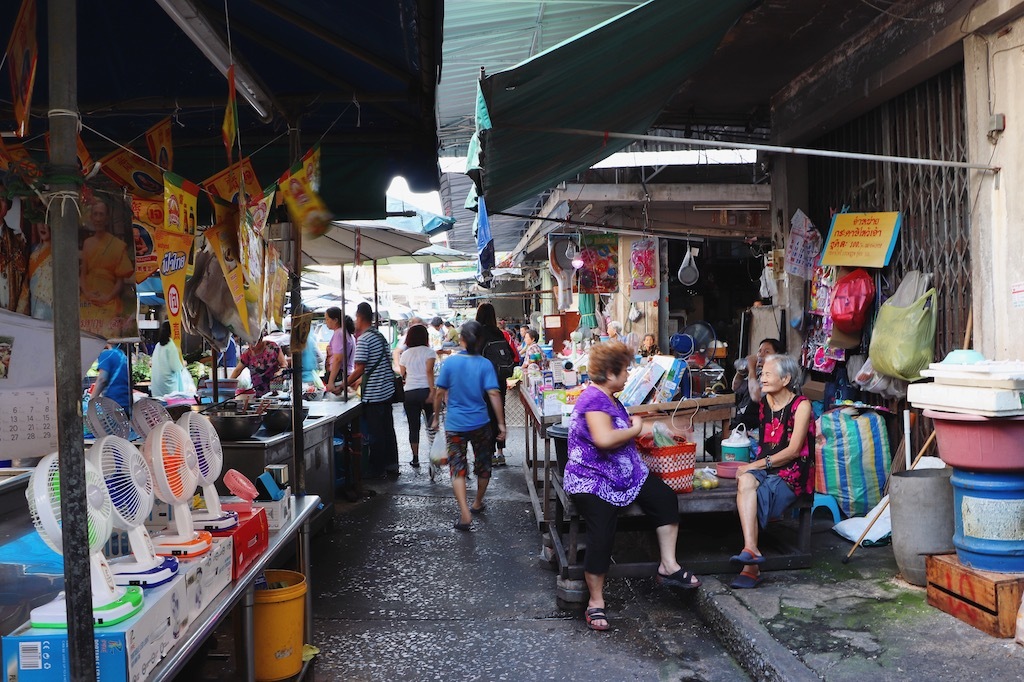 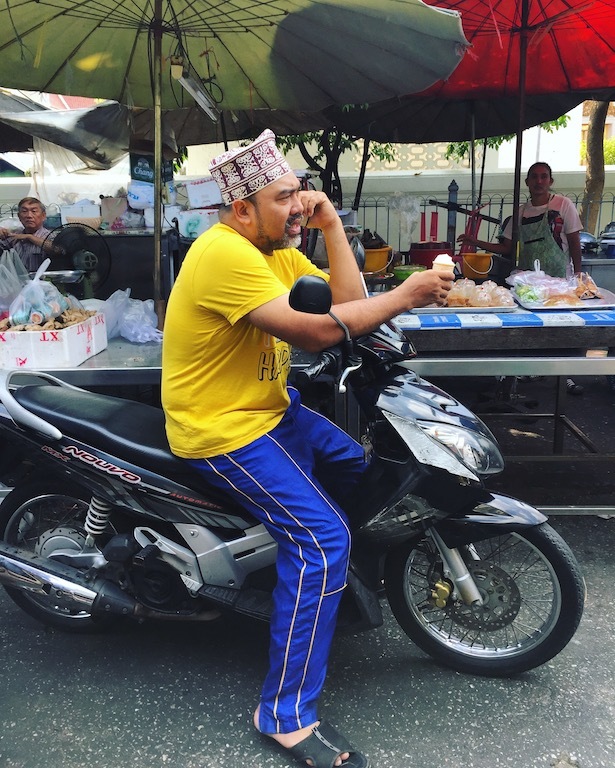 At Wang Lang Food Markets, more food is devoured in a bustling restaurant with local medical students on their lunch break from the hospital next door. Plates of spicy papaya salad, sweet Thai sausage and crispy fried chicken are on the menu followed by a sweet finale of Tup Tim Krob, a dessert of soft, chewy water chestnuts served in ice and coconut milk.

Beyond food, there are the sights of the city to see taking a long boat down the winding canals, the few that remain in a city once referred to as the Venice of the East. Zipping by artisans in their open-aired workshops and past food sellers cooking their skewered meats in floating kitchens is a highlight. We stop by the Artist House, Baan Silapin, a centuries-old traditional Thai wooden dwelling on the canal edge that today is a gallery and puppet theatre and also a local Wat, Buddhist temple, where we were the only westerns exploring the lush tropical gardens.

The tour finishes by Tha Chang Pier ending an unforgettable morning of exploring, eating, and experiencing the best cuisine Bangkok has to offer. For those with intrepid tastebuds looking to experience the ‘old’ Bangkok, this tour is for you. 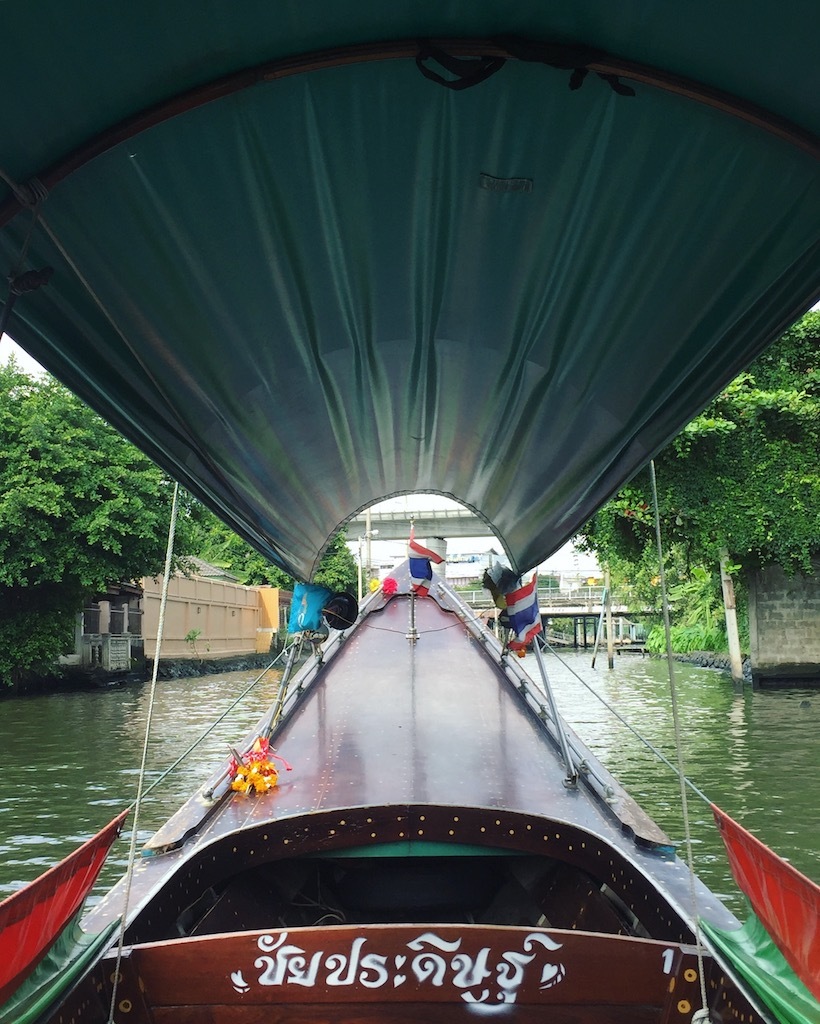 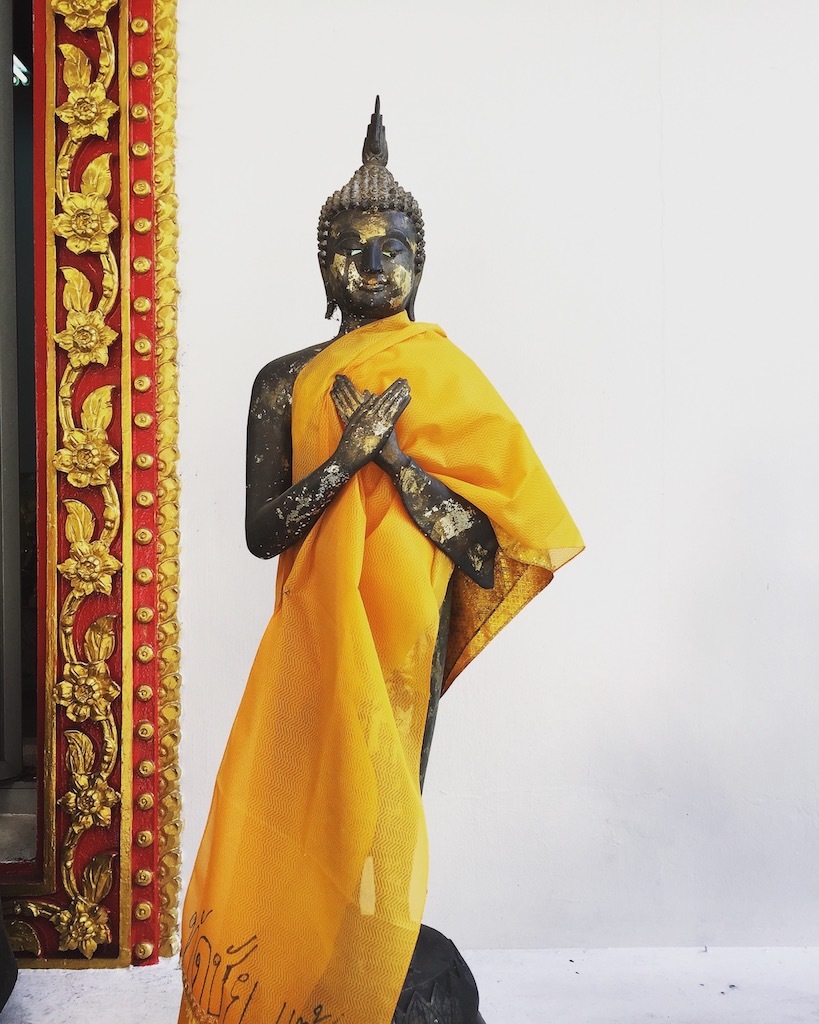 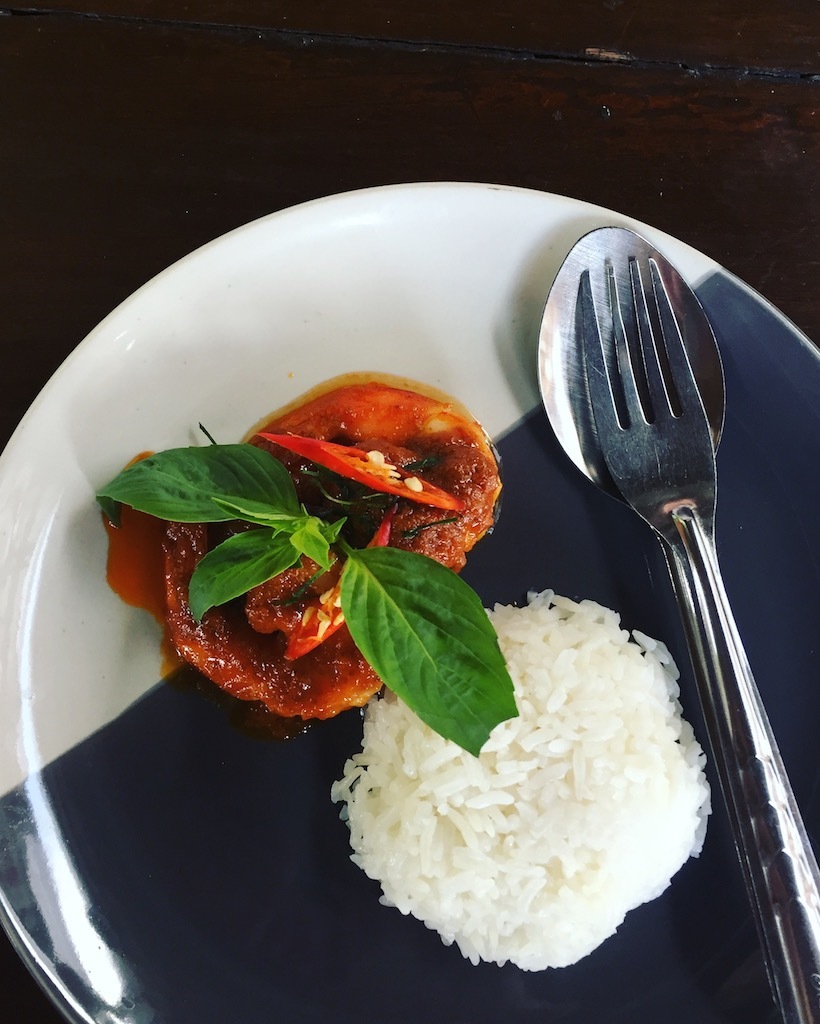 Thonburi Food and Canal tours run every day from 8.45am until 2pm.