Easter is undoubtedly the biggest holiday in the Catholic calendar when four days of rest, remembrance and celebration happen all over Italy. In Florence, the annual Scoppio del Carro takes place, a yearly spectacle of explosion in Piazza Duomo at 11am on Easter Sunday.

Its origins date back 1000 years to the First Crusade on 15 July 1099. It’s said the Florentine, Pazzino di Ranieri de’ Pazzi, was the first to raise a Christian banner above the city of Jerusalem. For this, he was rewarded with three chips of stone from the Holy Sepulcher that were later used in Florence during Easter celebrations to light fire which symbolized new life - this fire was then distributed around the city by cart, where families would relight their hearths that were traditionally extinguished on Good Friday. 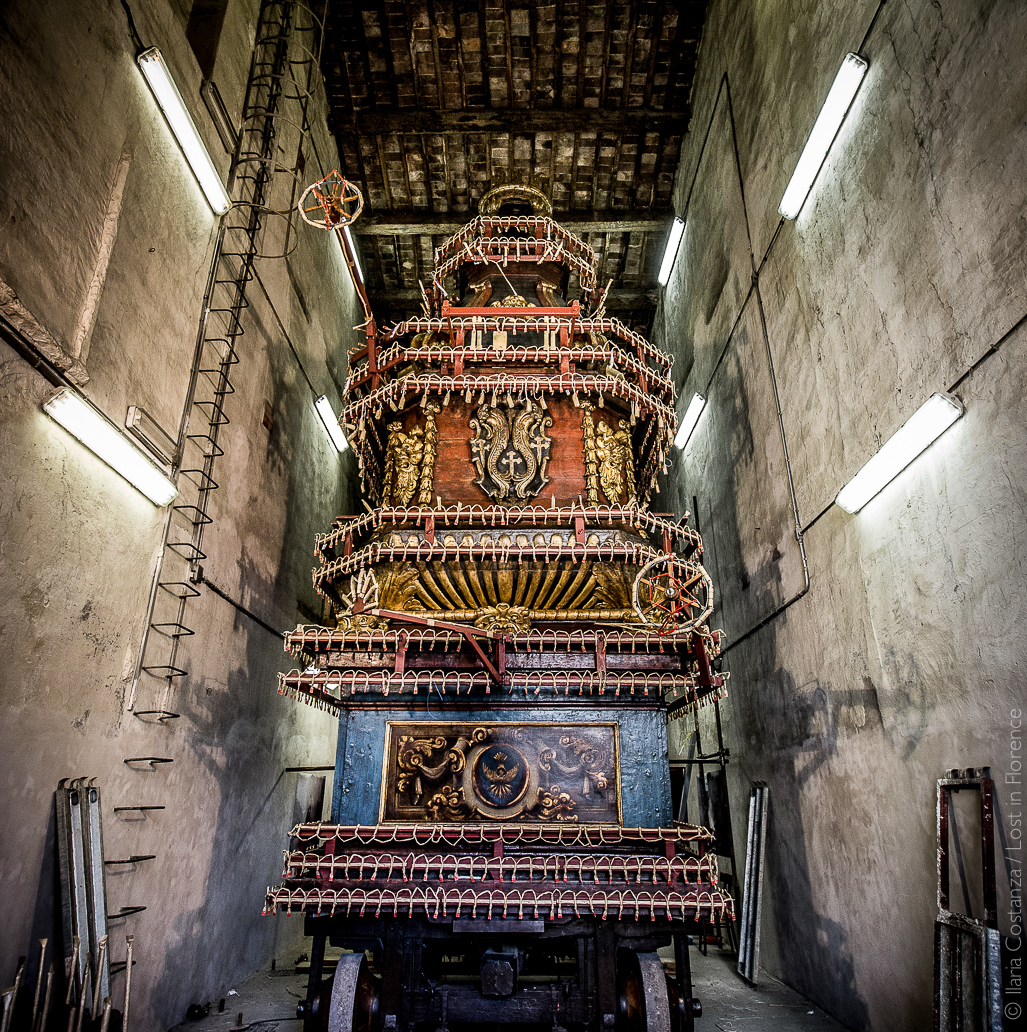 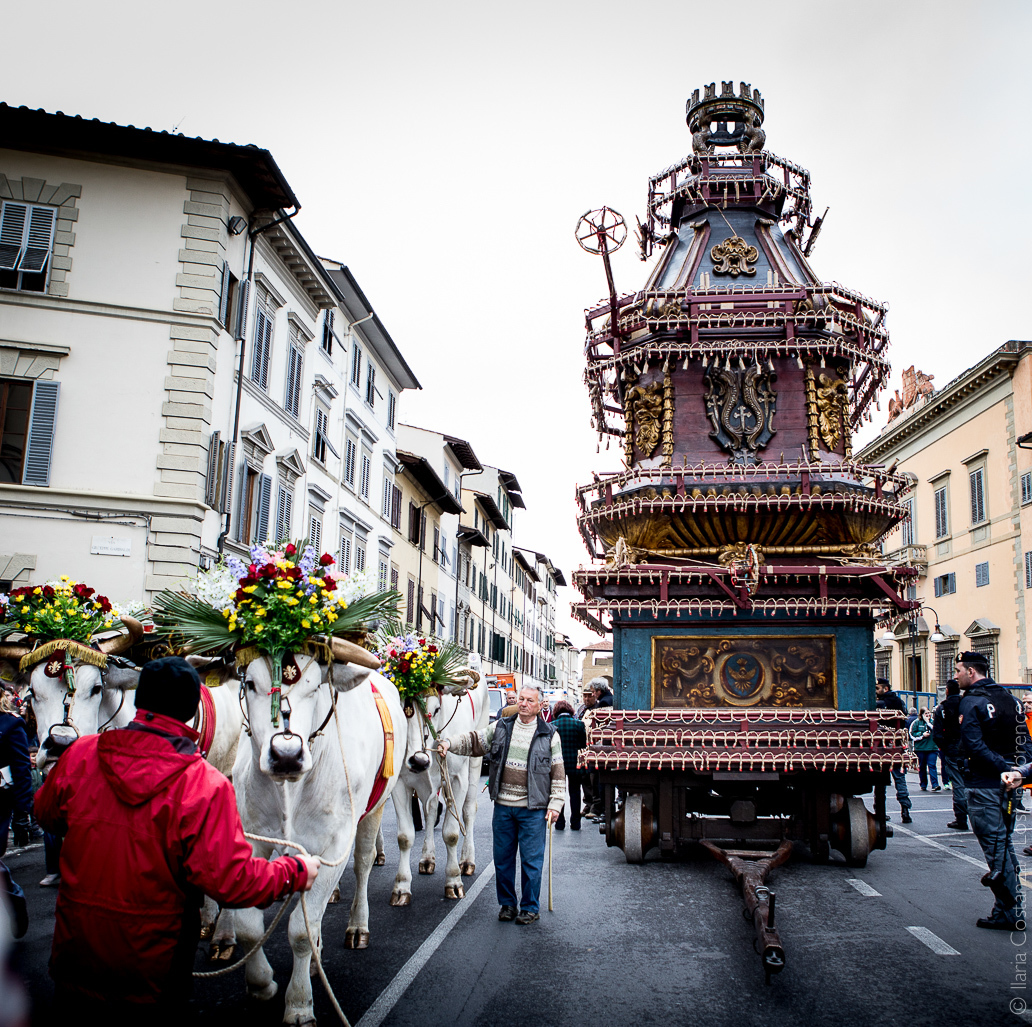 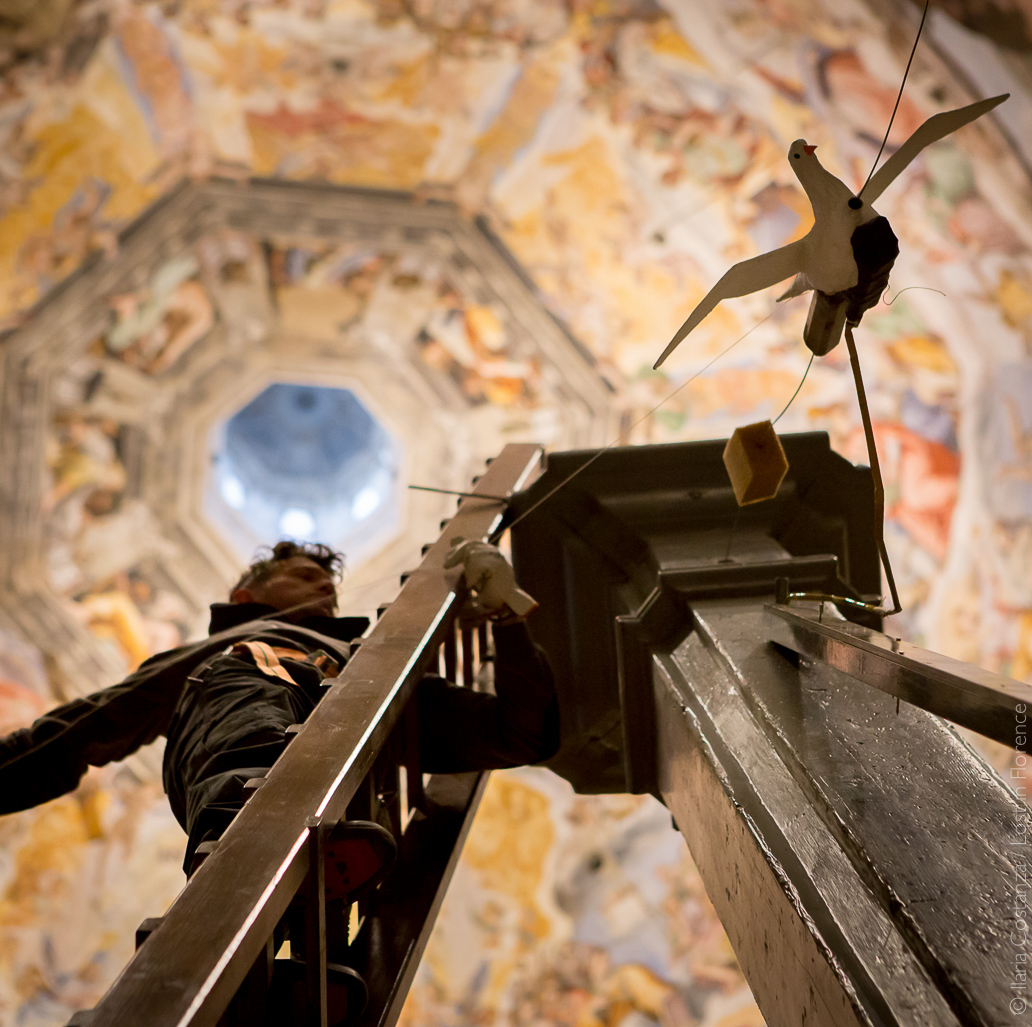 This tradition has continued and, since the 15th century, a richly decorated cart travels through the streets of Florence on Easter Sunday pulled by white oxen enroute from Porta al Prato to piazza Duomo. Once it arrives, a wire is run from the choir of the cathedral and fixed to the center of the cart and at 11am, a dove-shaped rocket, the colombina, is released inside the cathedral which slides along the wire, leaving a trail of smoke along the length of the church nave, then setting the cart alight on impact with a cluster of fire crackers with hundreds of multicoloured fireworks exploding to symbolize the next years harvest and which bear the emblems of Florence, of the old Pazzi family, and the Wool Merchants’ Guild.

Yet who is responsible for such a spectacle? I had the chance to discover, and see inside the secluded 19th century workshop of Pirotecnica Soldi just out side of Florence, to find out more of their role in this historic enterprise with Fulvio Soldi … 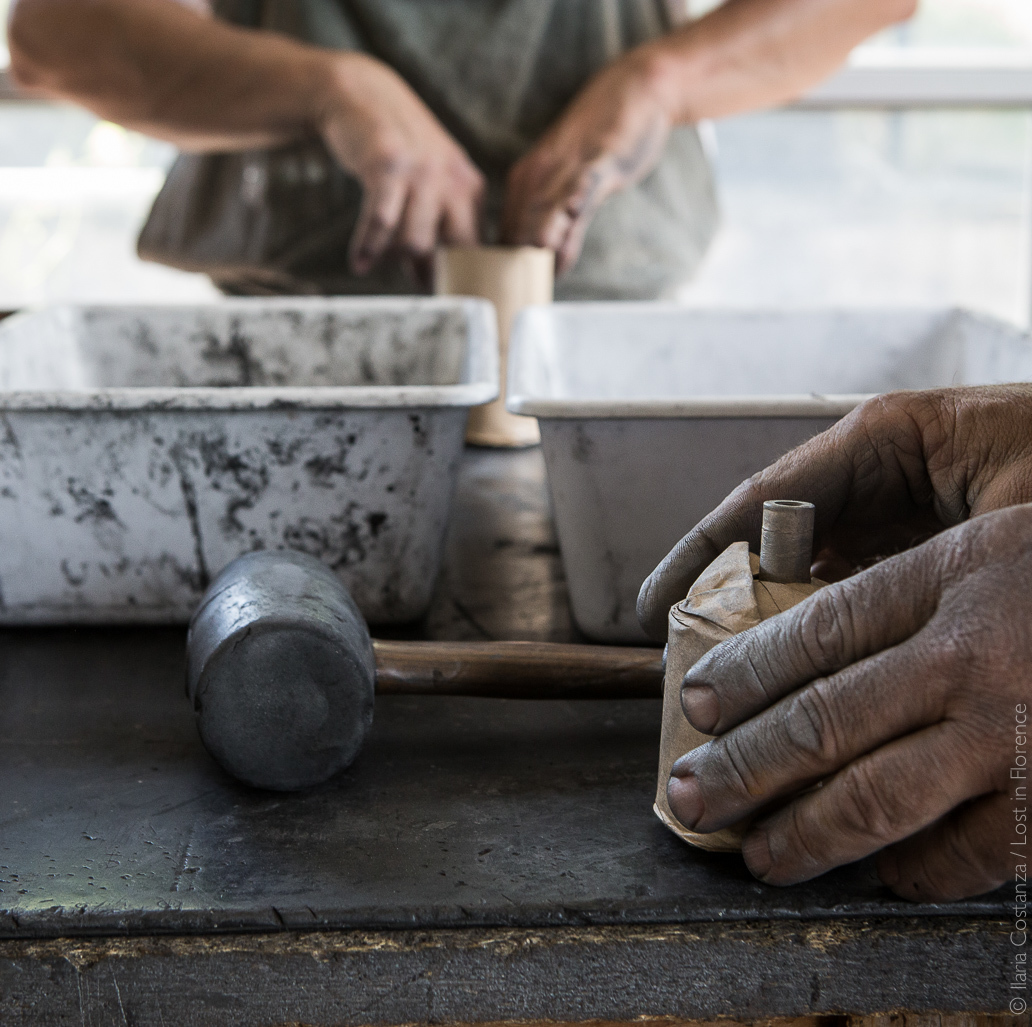 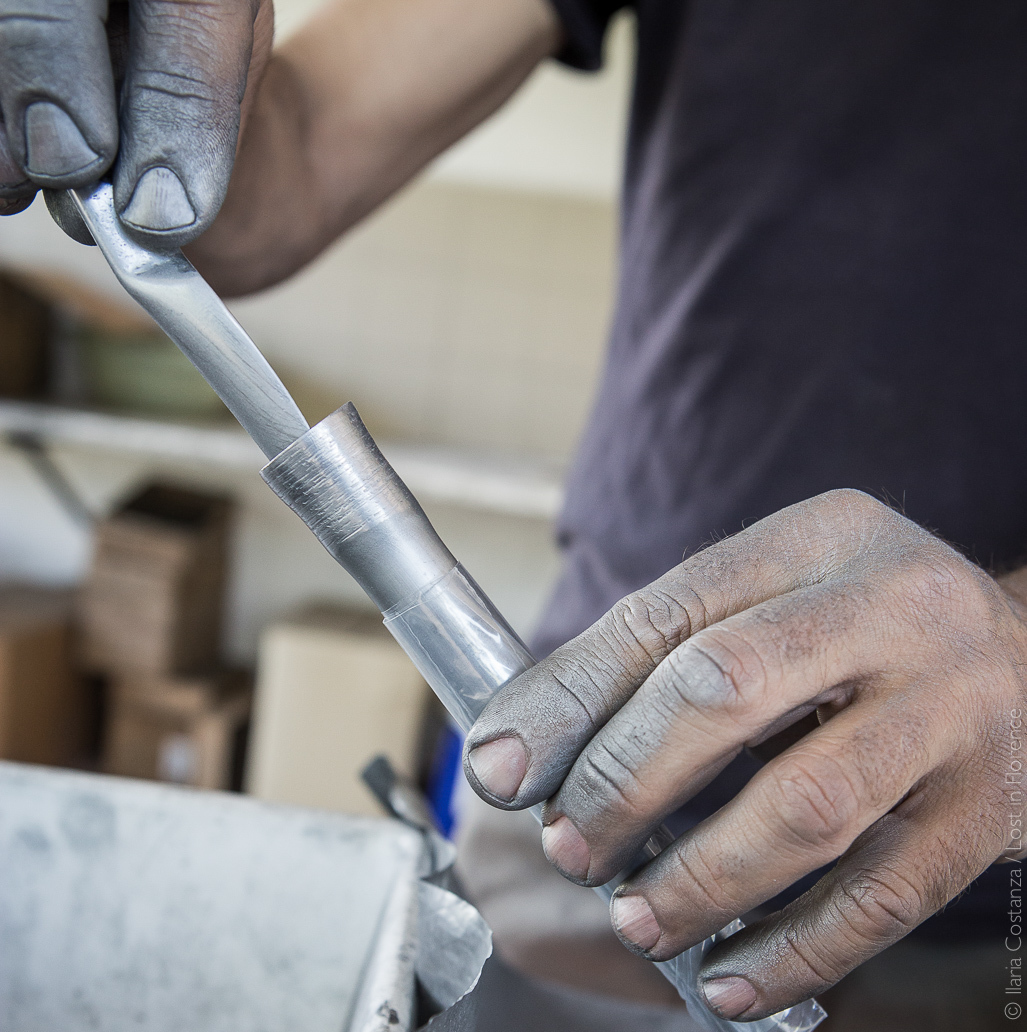 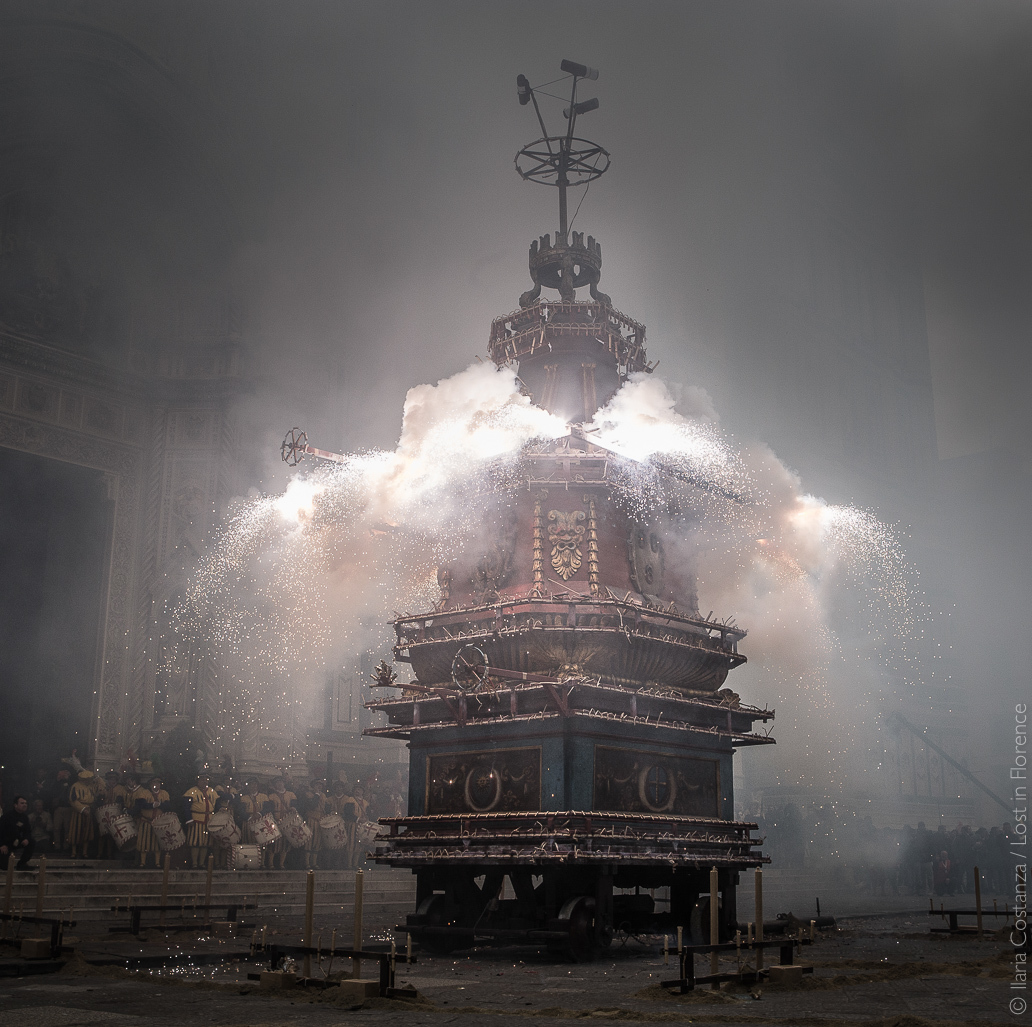 How did the family become involved in the fireworks business in the first instance?

Our great-great grandfather was a "scalpellino" in the mid 1800's (his work was to etch the grooves in the flour mill stones as they wore out and became smooth). He had a passion for sparks and fireworks - as well as doing his own work he went on to learn about fireworks from some small local companies that were active at the time, but alas no longer with us. Then, together with his brother who was a metalworker, they began at first writing festive wording for saint's feast days, then preparing small shows with Catherine Wheels and fixed elements, until they grew and by the beginning of the Second World War. Pirotecnica Soldi was a fully-fledged business run by Bruno Soldi. Since 1869 there have only been males born into the family, so the work was - and continues to be passed down.

How long have Pirotecnica Soldi been part of the Easter events?

We have been doing the Scoppio del Carro in Florence since 1989. The Scoppio is not a fireworks display as such, you need experience and know-how and above all what my family does is produce bespoke fireworks for every event, this requires a mix of tempered explosions (the Carro is situated between the Duomo front and the Baptistery - where else in the world are "bombs" allowed near such treasures?!), coloured smoke, firecracker sounds etc. many fireworks companies nowadays buy all their products, very few make them like us.

How many family members works together; are all employees in still only family?

Our family has always lived and made fireworks in the Valdarno, near Figline. It is still completely family owned, run by myself and my brother, Sergio, and younger cousin Alessio, and in total during summer there are 8 workers. 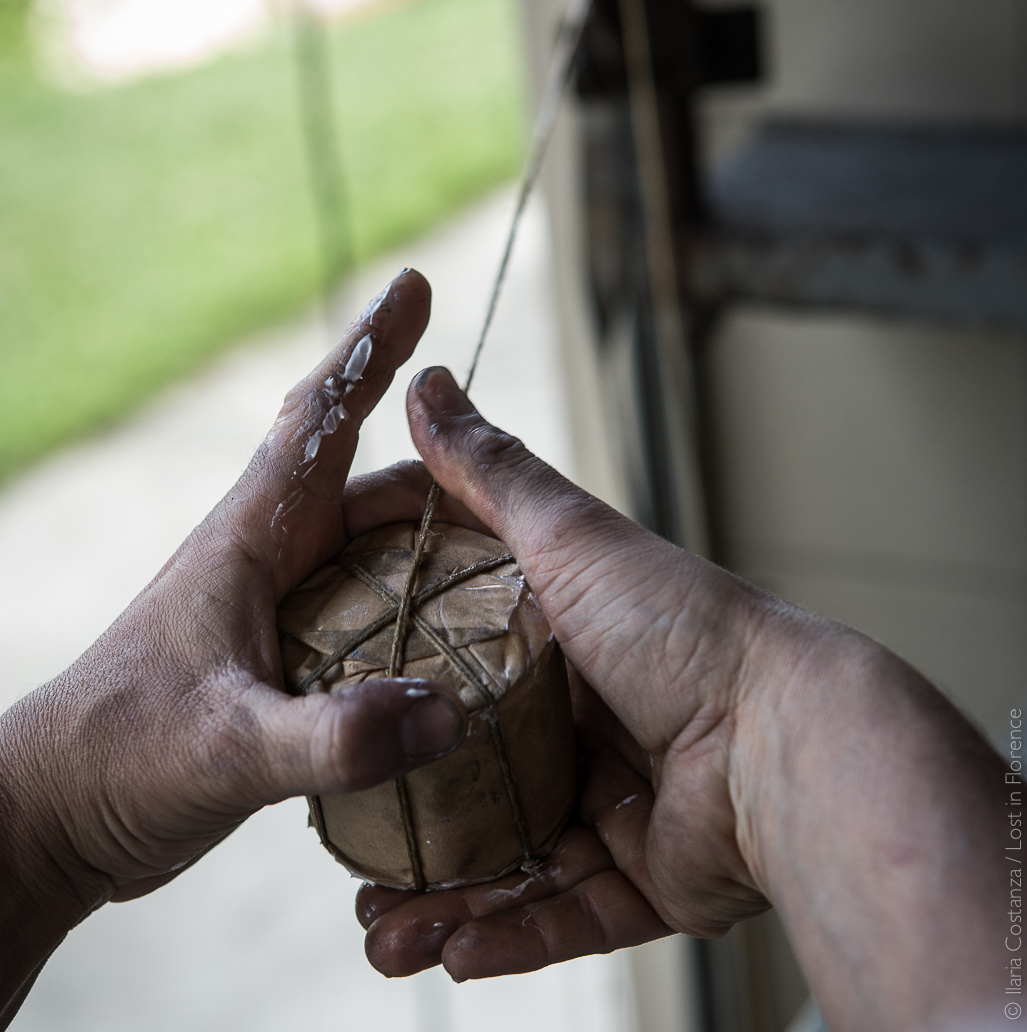 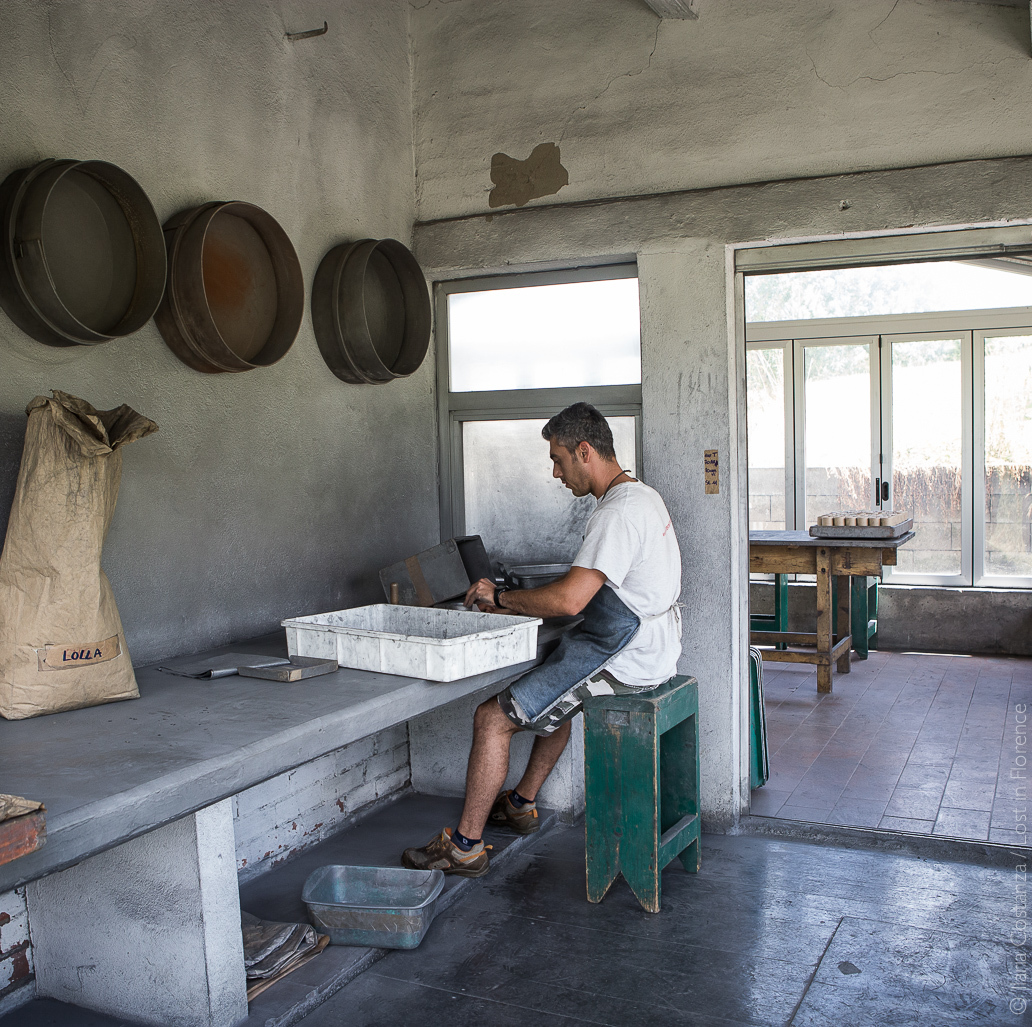 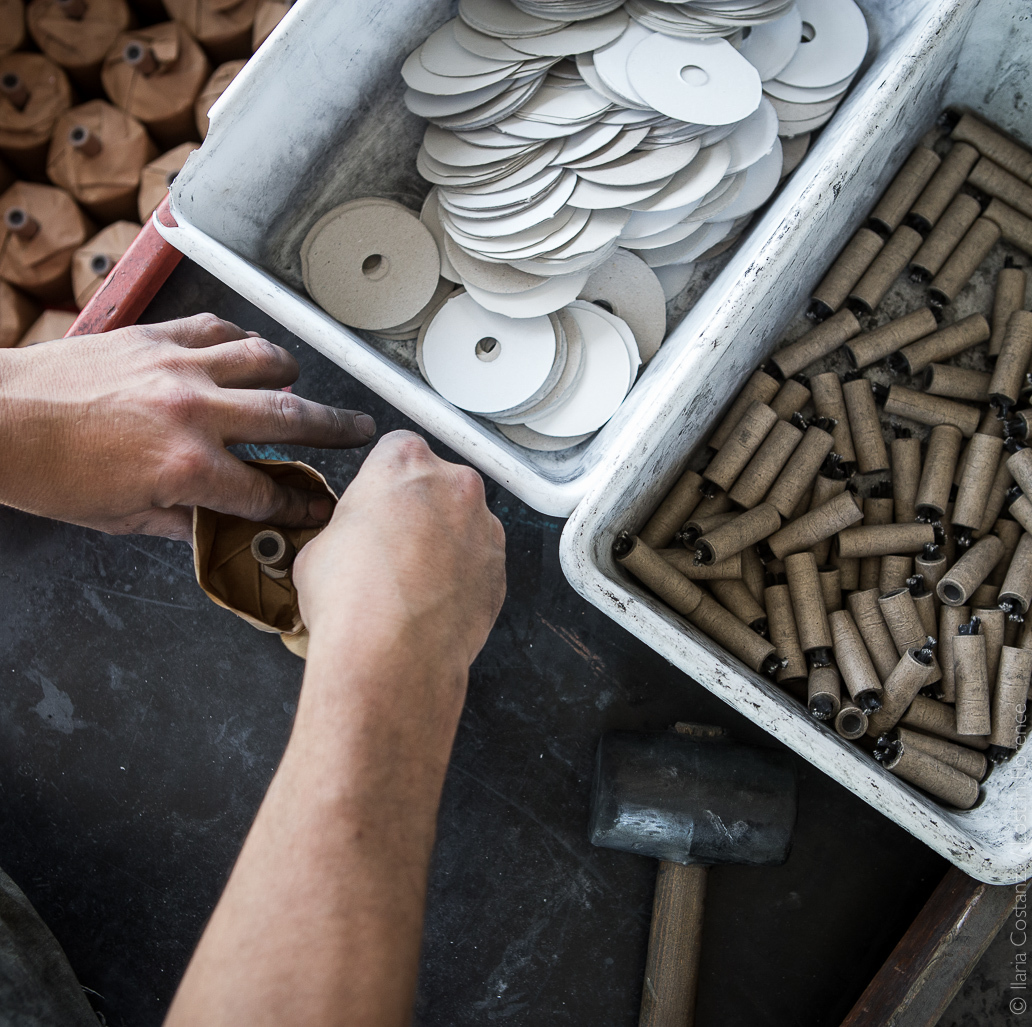 Kim and Kanye didn't have fireworks at their extravaganza, otherwise my family would have been there! Yes, we did the shows for the Indian wedding in November 2015, we have the exclusive for private firework shows in the garden of the Four Seasons and many of the Villas alla round Fiesole and the Tuscan hills. The hardest part is not the fireworks show per se, but the administrative bureaucracy: getting permits and liaising with the Vigili del Fuoco. Last year Pirotecnica Soldi did the most incredible show on the Arno river set to music for the Biennale dell'Antiquariato at Palazzo Corsini, similarly we were involved with the spectacular Stefano Ricci x Pitti show last June on and around the Ponte Vecchio, to name just a few events. We also do international shows and competitions, winning in Montreal a few years ago.

Over the Easter weekend, Scoppio del Carro is an event not to miss. Music, celebration and fireworks all in one morning setting the Renaissance city, literally, alight. It begins Easter Sunday with a procession at 9am finishing with the fireworks display at 11am in piazza Duomo outside the entrance to Florence’s famous cathedral. Come experience Florence in true spectacular fashion. 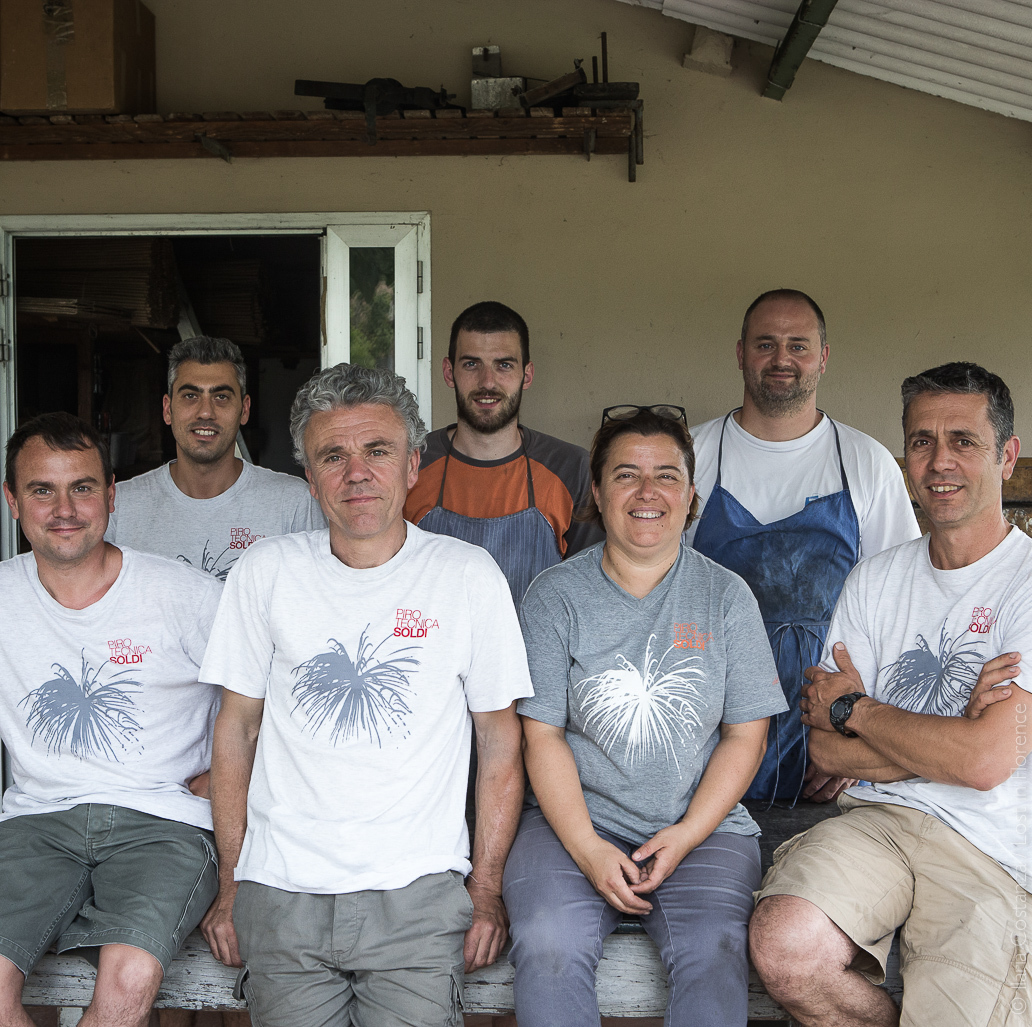 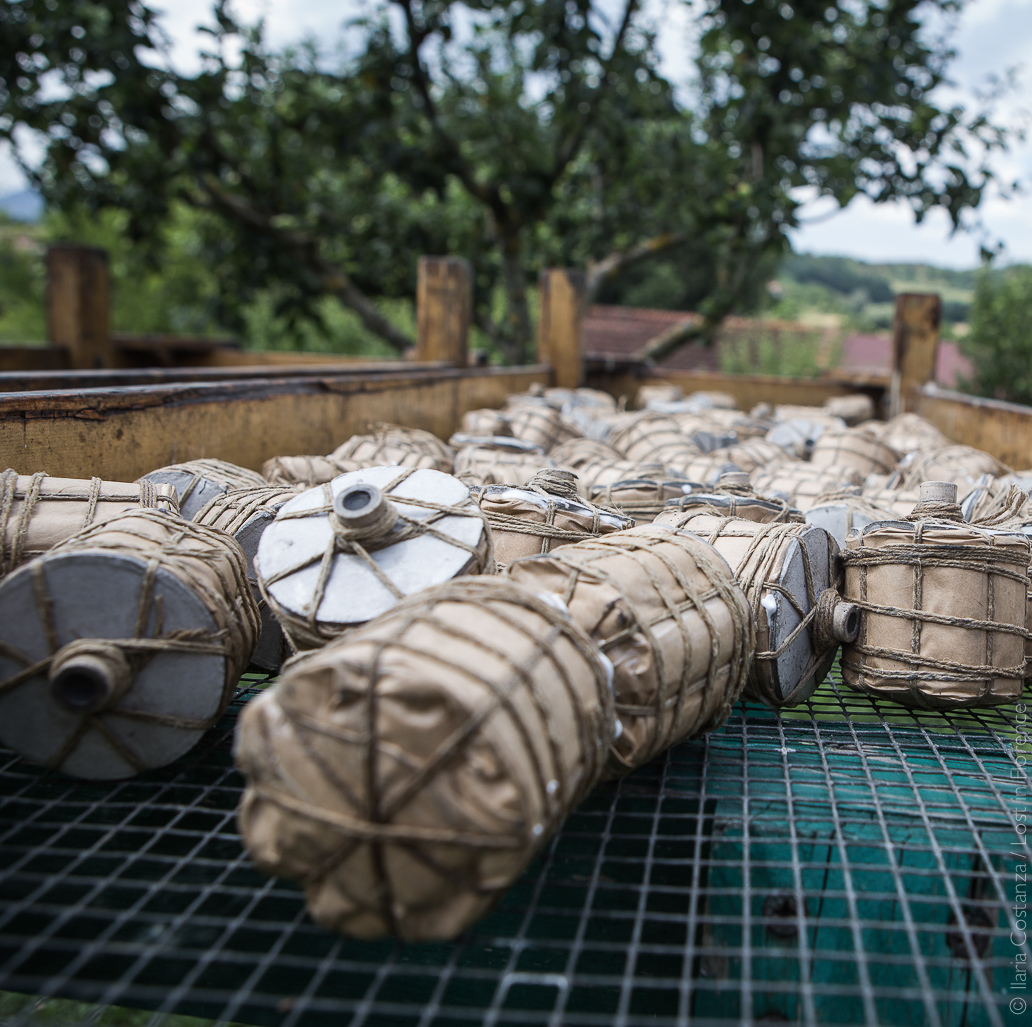 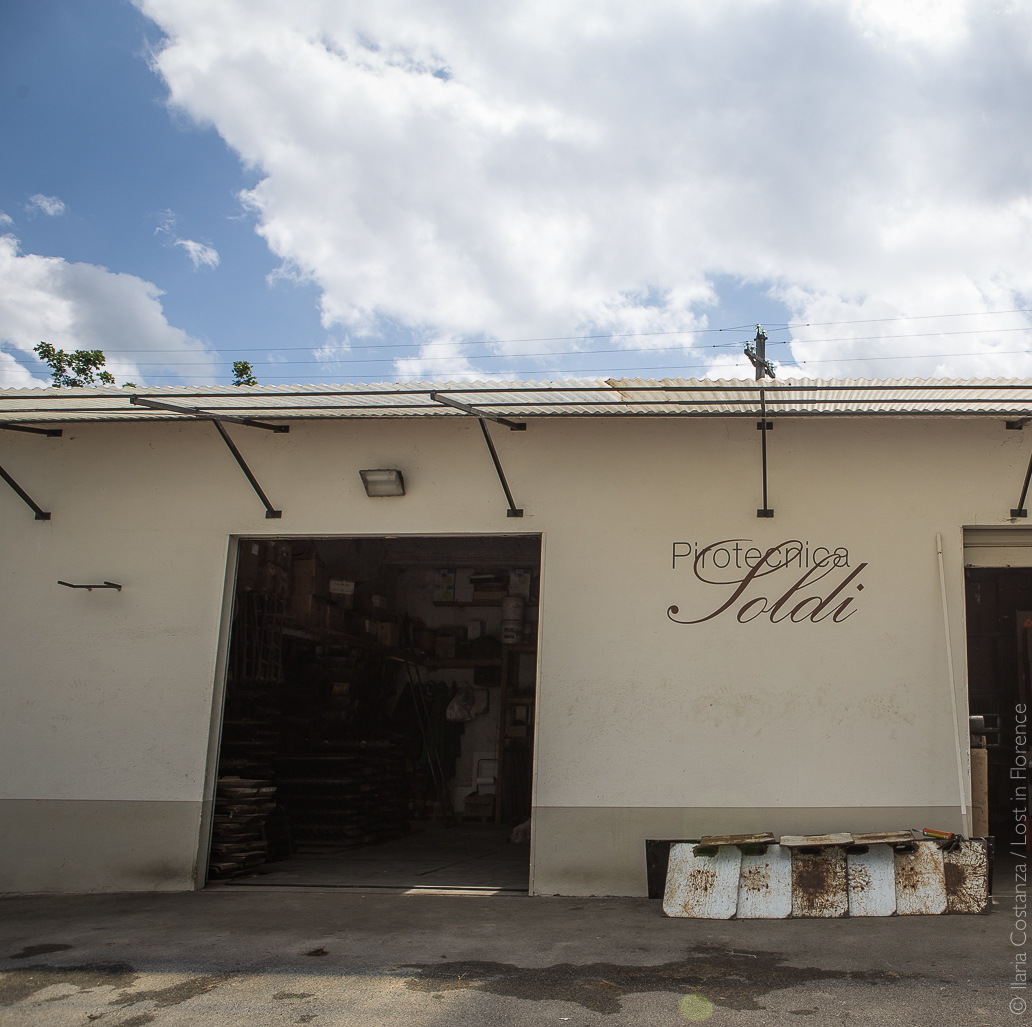